Cos the MC isn’t always owning the crap out of the rest, you know.

Realism in terms of the balance between winning and losing, as well as the characters’ speed in learning ‘new’ moves may be an important factor to some who want to be as grounded in the learning journey of the MC as possible. Naturally, Kuroko no Basket may be a little lacking in this aspect, since it always been known to be on the more … supernatural side of things, with new moves gaining traction often in the middle of games, and the fact that characters move so fast from the start, but still manage to get even faster. For some of the same reasons, Yowamushi Pedal is also leans more to the unrealistic side of the spectrum.

On the contrary, series like Diamond no Ace and Haikyuu!! are rather grounded in realism, and without spoiling anything I will say that Diamond no Ace really stands for the proposition that every step of a journey to excel at a sport is a tough one, and the learning curve is steep, as with anything in real life. Haikyuu!! gets the benefit of being called ‘realistic’ because of how its first season proceeded and ended.

For those who like a more slice-of-life feel to their anime, Big Windup comes out tops in portraying the teammates and characters as high school students just enjoying their life playing baseball and chillin’, via interactions and the way there aren’t any obviously overly-superpowered characters in the MC’s team. Big Windup takes a very down-to-earth approach which is really appealing especially when excitement is not exactly compromised during the games.

Kuroko no Basket comes out on top for this with no other competitor that can even come close. The story sucks you on from the very episode, and it is the only anime that is most likely to be unanimously addictive, especially when it is a very game-focused series. Yowamushi Pedal and Haikyuu!! start out relatively slower on the contrary, but their pace picks up fast once the characters are fully introduced, with Yowamushi Pedal launching into full throttle first. Free!, in contrast, is possibly more character-centric, and is probably the only sports anime that I would say is undeniably less game-focused than the rest.

Personally, Diamond no Ace tops even Kuroko no Basket given the speed which I marathoned it, but I can’t find any objective quality to pin down why the viewing experience was like that for me without going into my personal preferences for lovable main characters and an MC with a slightly unique backstory.

All the sports anime I have tried comes out to have more than merely decent character development, so its really difficult to compare all of them. Kuroko no Basket provides a decent, steady focus on secondary characters’ backstories when they appear in the form of rivals throughout the series. However, we are only given snippets of our more main characters’ backgrounds in the first two seasons where the full truth is finally revealed and the puzzle pieces click together (finally) in the third season.

On the contrary, Haikyuu!! does not rush into this at the start but spends time drawing out important characters one at a time, giving the audience sufficient time to acquaint themselves with the character and understand their roles and motivation in playing volleyball. Time is also spent on their interactions as teammates. The result is a successful one given that it enables the audience to view each team member as integral in performing a role in the team, instead of the normal MC vs everybody else segregation that some anime series fall prey to. In direct contrast to Haikyuu!!, however, Big Windup introduces many characters but there simply isn’t time to dwell on other characters aside from the MCs.

Yowamushi Pedal stands out in a different way here. The core team is introduced and given well-rounded backgrounds, but their rivals are also given the same treatment such that it wins the Best Rival Team title in all the sports anime I have watched. That means that I am often fickle in who I am rooting for, the MC’s Team or their arch-rival team, simply because the rival team’s characters are developed about as well as the MC’s. It probably also helps that the backstories are succinct yet impactful on the mind.

Chihayafuru, being a nuanced sports anime that is unique itself, also approaches this differently. Characters’ motivations are explored but its the depth and complexity that makes them different. There is a lot of hand-wringing going on (at least for me) because my feelings are so mixed that one can’t help but applaud at the creator’s prowess in creating such holistic characters. 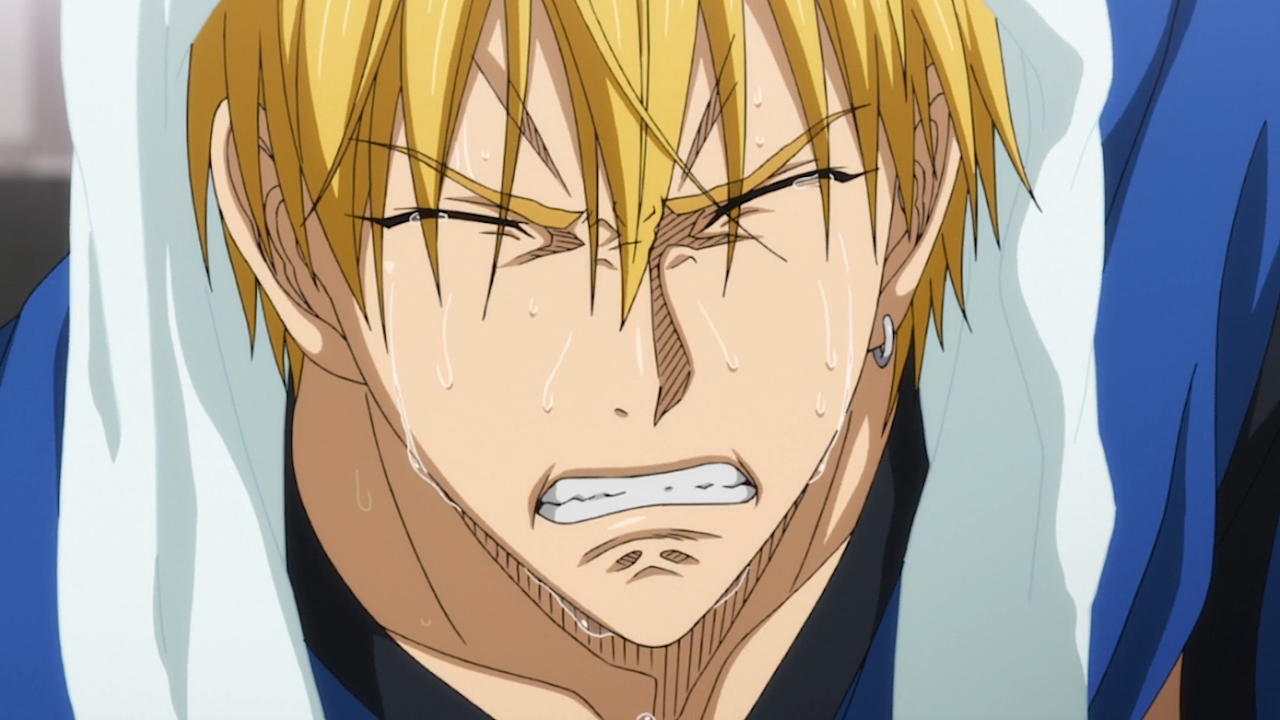 A spoiler perhaps, except that you don’t know when it happens. :>

Emotional impact on viewers has always been a tricky balance of plot, character development, realism and emotional attachment to the characters. Given that personal preferences can vastly differ, this is most possibly the most subjective factor out there to rate. Nevertheless, I will attempt to at least give reasons for differing amounts of emotional impact (and trauma) I have experienced.

I experience vast amounts of emotional attachment towards Diamond no Ace and Haikyuu!!, perhaps because the way the characters were developed is relatively better than some of its counterparts. The value of teamwork is also, objectively, emphasised upon and is a major part of the story. Naturally, when one loves the characters, one cares a lot more about whether they win or lose. I concede that my emotional attachment toward Yowamushi Pedal and Kuroko no Basket is more superficial, and my lingering love towards the Kuroko no Basket franchise depends entirely on character quirks. Kuroko no Basket gives more focus to the talented and gifted, namely the main characters, hence the team camaraderie that should have been present after 75 episodes is still lacking when compared to the 25-episode-long Haikyuu!! and Diamond no Ace of the same length.

Chihayafuru‘s emotional impact stems from a source that is unlike the pure shounen tendencies of all the rest of the other sports anime I have watched. Notions of friendship still exist as of large part, but the romance part of the anime is so integral to the plot that it naturally seeps into the overall motivation as well. Elements of cultural appreciation that come with the ambiguous classification of karuta as a ‘cultural sport’ play a big role as well.

Kuroko no Basket is an obvious choice as an introduction to the genre not only because of my personal experience. Basketball as compared to the rest of the sports is relatively easier to understand than baseball (a really complex sport which is not thoroughly explained as most baseball series already assume a good command of the rules and strategies). Also, Kuroko no Basket with its supernatural-like power inclinations, bears a strong resemblance to shounen series for those looking for a good linking series from shounen to sports genres.

I Just Want To Ogle At Hot Bishies

The ones with the least cloth most of the time.

If you just want the hot bishounen guys, most appealing character art, the least clothes, and more abs to eyeball point to Free! It is also a fujoshi black den given it has one of the strongest yaoi vibes amongst the characters. Kuroko no Basket comes next in having decently good-looking characters for those who are a fan of slanted eyes (Kagami, Kise) or like wide eyes (Kuroko, Akashi). Diamond no Ace‘s art comes at a more shounen angle, but nevertheless boasts of pretty main characters that personally appeal to me a lot than a cast of generically good-looking guys.

Yowamushi Pedal‘s art pales in comparison given the rougher lines that are used that show that they clearly pay less attention to this aspect. Haikyuu!! has interesting art at the very least. Big Windup has acceptable art for the trained bishounen-attuned eye, but a big disadvantage lies in the fact that most of the characters look so similar it becomes hard to tell them apart. Chihayafuru, meanwhile, has …. less guys to look at. (but Taichi makes up for all of it, I promise.)

This ends my two part series on my opinions on Sports Anime which I hope has enlightened you guys about the genre in general. I am aware there are still many sports anime out there that I haven’t watched, so bear with me if the comparisons are (still) lacking in any sense. Also, because I haven’t watched the sports anime that present a predominantly female cast, I apologise for being unable to give any advice in that regard. Having said that, I hope you have enjoyed reading this, and feel free to comment for any opinions you have on these anime, or to ask for a recommendation that is more catered to your needs 🙂