Finally, I blog about the anime that overturned my expectations about the sports anime genre, and got me finding out all the kinds of sports anime that were ever released. This is the anime that got me started on my subsequent rampage of any anime to do with the tripartite alliance of competition, working in a team (with extra emphasis), and the theme of effort vs. talent.

This is, however, hardly my first sports anime. I had started on Kuroko no Basket as my first foray into the genre. It was exciting, kept me on edge, and amazing. I still love Kuroko as one of my favourite characters. There was lots of sportsmanship and friendship too in that, and I still consider it my favourite sports anime, ever.

However, Haikyuu!! is an anime that I ventured into with an expectation that it was similar to Kuroko no Basket and hence that a guaranteed 25 episodes of enjoyment would await me. I was pleasantly surprised that it was similar in certain ways (which makes it awesome), and yet..evokes new emotions in me that I have never felt that I would have experienced while watching a sports anime.

This brings me back to the point that I feel that anime enables me to experience things vicariously, through the stories of characters that feel so real to me. I know I would never again live the life of high school, middle school while feeling that I am giving my all, living the best way I could and having the most fun with people. I guess my anime addiction can be explained by the fact that I have never lived those experiences, and my love for the characters makes me feel alive, like the fact that they experience these things makes me feel happy for them in itself.

But I digress. Haikyuu’s plot premise is nothing very new; it tells the story of a passionate boy, Hinata, who fell in love with volleyball by chance, meeting his eternal rival in a middle school match, Kageyama. Alas, they realise that they have ended up in the same high school and hence volleyball team together. This is a story depicting their volleyball journey as they put aside their differences and learn to work together to defeat other schools in the Inter-High tournament.

Haikyuu!! started off at an easy pace as we are introduced to Kageyama and Hinata. They, of course, don’t hit off well, and are seen to be always fighting. However, when they inevitably have to work together, they manage to gain a chemistry with each other that is unrivalled, resulting in a strong bond and trust that becomes one of their team’s strongest weapons against their adversaries. The fact that their skills complemented each other so well helped, too. Their other teammates are also well introduced, and their motivations are also given airtime in the series to enable the audience to identify with them. The way the series portrays their internal struggles, the complicated feelings they harbour towards each other (especially between rivals for the same position on the team) is spectacular. All these culminates in the barrage of an intense desire to win their opponents in competition. I realise that the series portrays something very well – their intense desire to win is as strong as any other team they play against – and this is also shown. Another aspect of this show I am pleased with is the way the ‘enemy”s backstories are developed as well, like any other good sports anime (Chihayafuru, Kuroko no Basket)

However, what makes Haikyuu stand out is its fiercely volleyball-loving, teammate-loving team, which just makes me melt into a puddle because their interactions are so freaking adorable. Their comedic moments are never forced nor repetitive, and I am glad each character does not have this pet phrase they utter or reaction they have that are all too common in other shounen anime. It feels refreshing whenever they talk and fight with one another, and that adds to the realism of the characters.

What makes Haikyuu outstanding for me is the fact that so many emotions were literally bursting out of me when I was watching the last match of the series. The match was not particularly long, but it was intense as you could literally feel the desire of both teams to win the match. My palms were sweating like crazy and my entire body was on fire as I was watching that match, and I am not even exaggerating any of that here (I wrote that down when I was feeling it). While I am thoroughly inclined to reveal the eventual outcome of that match, I shall not do so here. But what I felt then is something I would remember for a long time.

While I initially felt that the beginning of the series was not as exciting (as I was comparing it to Kuroko no Basket, I realised belatedly), I am glad they did not immediately jump into competition, full shounen style. The slow pace in developing characters and portraying the training that the characters go through paid off in the end, for it made the audience (me) identify with the characters a lot more, and suffer more when they lose and be infinitely more happy when they win.

Overall, I would recommend Haikyuu!! as an anime that appeals to everybody, for die-hard sports anime fans and those who have yet to touch a single one. If you want an emotional, exciting ride, this is the anime that you should go for.

I devote the end of this post to Tobio Kageyama’s numerous facial expressions, who is is the most adorable male tsundere ever xD 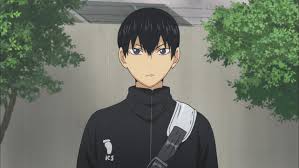 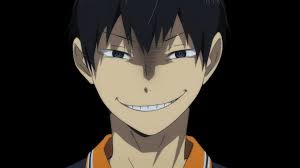 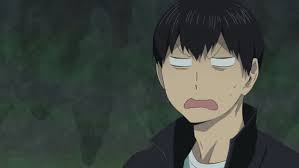 and, of course, for my most favourite team: 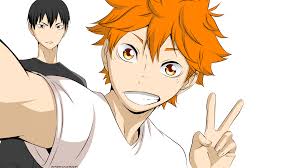 *Disclaimer: All images in this post are the rightful property of Google Images. I do not own any of these images*